I
If I’d been closer, I might have been more interested but from that distance you can only see things... Looking at this man on fire I wasn’t emotionally engaged.

II
In general people weren’t paying attention because we were focused on our things and thought of what had just happened as of an incident, something that had already finished.

III
Radio listeners didn’t hear anything about it in our transmission. Why? Two words of explanation. Mainly because the background music consisted of lively kouiaviaksand cracoviennes. How do you say in that moment that something is on fire, something is happening? If the band had stopped playing, the reporter would have had to react, say why they had stopped playing, there would have been a point of reference and we would have started to report.

IV
And we had been trained as well to do what he had to do and not to do other people’s job, because no one was going to print it anyway and there could also be some trouble.

III
We were dumbfounded, and we couldn’t describe it well. I’m sorry but would you be able to describe the death of a man on fire?

V
The biggest shock for me was that it all went back to normal, that another lot of young people were allowed out of the tunnel and they started to dance a jolly mazurka or something like that, I can’t remember.

That the sky was still blue and the music was playing. And I remember pigeons, too.

...I remember pigeons...
The fragment comes from the documentary by Maciej Drygas ‘Hear My Cry’

Those who saw what happened at the Stadium probably talked about it but how little they knew and how much of a gossip rather than a reliable piece of information it was, proves an excerpt from ‘Dzienniki’ [eng. Journals] by Stefan Kisielewski:

They are still saying that at the harvest festival, in the presence of Wiesio i Józio, someone poured petrol all over them and set themselves on fire. But it’s still not clear whose side they were on – of course no mention in the media. Commies have hard hearts – for example Ho Szi Min who leaves the nation to destruction and doesn’t care. Politique d'abord – they call it. They keep Americans in the check because they have nuclear bombs, H bombs (‘h’ as in ‘huj’ [eng. cunt] but apparently you spell it ‘chuj’. I’m starting to think that Americans are cunts). A new holiday in Vietnam: napalm Sunday.

First news about the tragedy at the Stadium which might have reached a wider public was published behind the Iron Curtain:

on 27th January 1969 the French weekly magazine “Le Nouvel Observateur” mentioned the event, which was later reprinted by the London weekly magazine “The New Statesman and Nation”. It was after the death of Jan Palach, who set himself on fire in Prague on 16th January 1969. This act was widely discussed in the media. 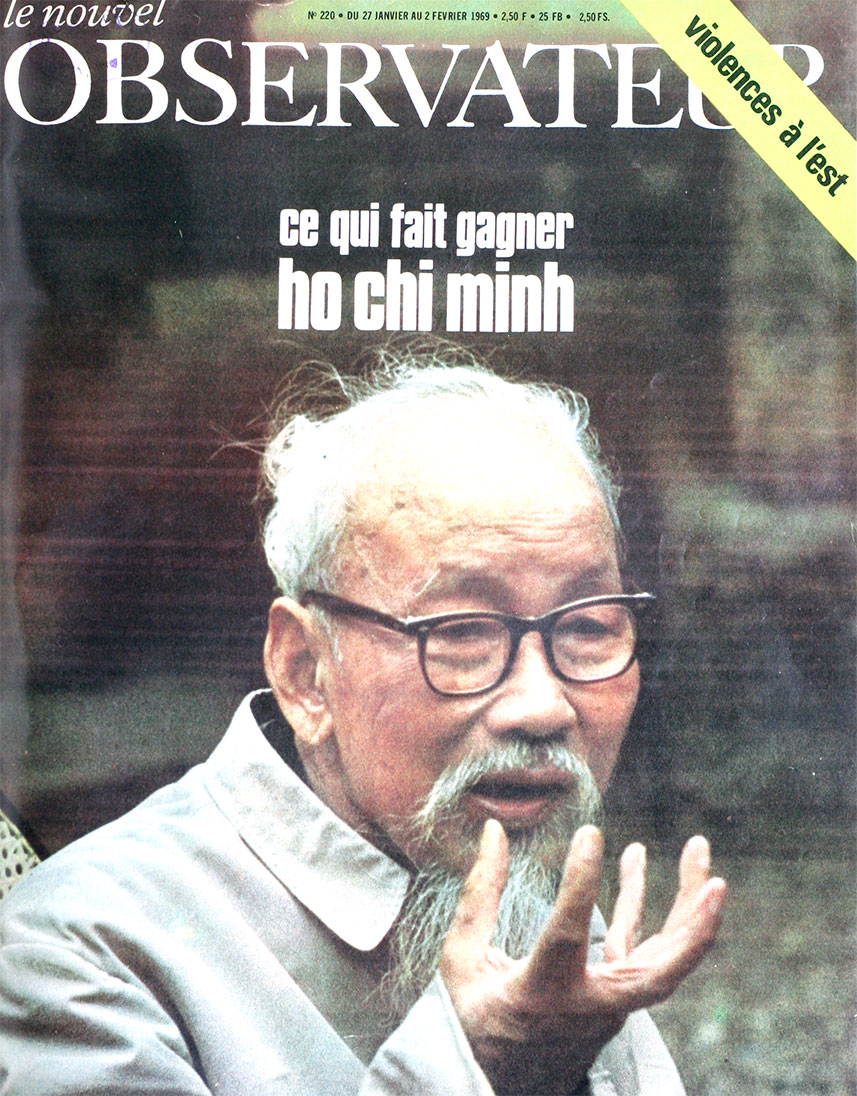 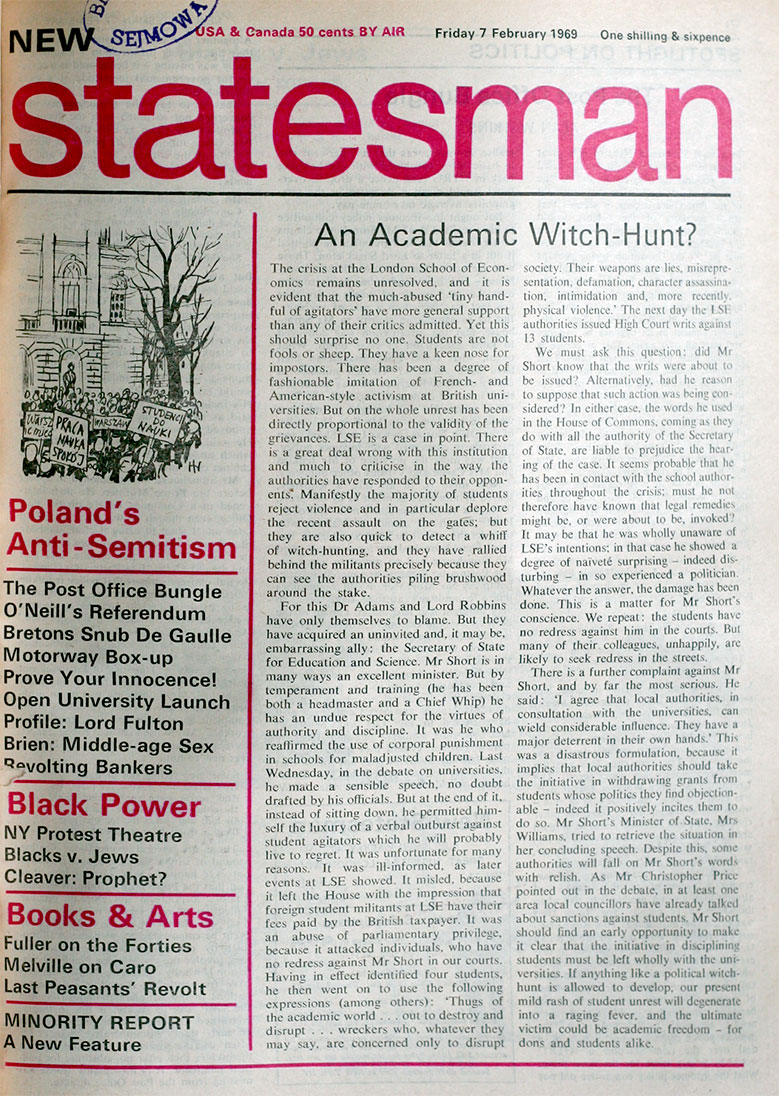 It wasn’t until April 1969 when quite a seriously distorted piece of news on Ryszard Siwiec’s act of self-immolation was published in a London magazine “Na Antenie” where the texts of selected Radio Free Europe/Radio Liberty broadcasts were printed:

Polish Living Torch
A French leftist weekly magazine “Nouvel Observateur” was the first magazine which revealed on 27th January in K.S.Karol’s article that several months before Palach’s death during the harvest festival celebrations at the 10th-Anniversary Stadium in Warsaw an unknown man poured petrol or alcohol all over him and whilst shouting something out, set himself on fire with a match. Apparently, it happened directly after Gomułka’s speech in which he justified the August armed aggression against Czechoslovakia, at precisely the same moment when the show part of the celebrations began. The flame rose to several metres and everyone immediately ran away from the victim. The Security Service officers put out the fire and took the suicide to the ambulance which in turn took him to the hospital.

K.S. Karol’s article was then reprinted in English in a socialist London weekly magazine “The New Statesman and Nation” on 7th February.

In the very same magazine in the ‘letters to editor’ section William Woods expressed his doubts as to whether the dramatic suicide described by Karol had really taken place.

It is of course possible – Woods writes – that an engineer from Przemyśl burnt alive at the Warsaw Stadium but if this had happened, the whole of Warsaw would have found out within a few hours. The town is abuzz with all kinds of rumours, and Radio Liberty (Poles call it Western Warsaw) has the most ingenious ways of obtaining information and sending it to those who still haven’t heard it. I just simply cannot believe that what was common knowledge in Warsaw, wouldn’t have reached Radio Free Europe or the Western press.

Blushing at this flattering opinion we must admit, unfortunately, that in this instance K.S. Karol and not William Woods was right.

The news of the suicide at the Stadium reached Radio Free Europe shortly after the tragic incident. However, it seemed so unlikely that the Station didn’t broadcast it. We thought the way Woods did. How could a scene like this have gone unnoticed by a considerable group of foreigners – diplomats and foreign correspondents who were in the stand? The riddle was solved later.

The suicide, an engineer in his fifties from Silesia, and not a 30-year old man from Przemyśl, like K.S. Karol said, wanted his protest against the invasion of Czechoslovakia to be noticed by Gomułka, above all. For this reason he positioned himself right under the PUWP First Secretary’s stand, in front of the tunnel from which competitors come out to the field. There is a hollow in this very spot so the protesting man could not be seen by those who were in the side stands. When the flames engulfed him, he ran towards the tunnel and disappeared from the sight of the crowds at the stadium. The Security Service officers managed to get to him in the tunnel and put the flames out. It remains unknown if he died in the hospital four days later like the “Nouvel Observateur” columnist reports. In any case, a Pole’s suicide sacrifice protesting against the invasion of Czechoslovakia went unnoticed, home and abroad.