In Poland the first attempt to reach the society and remind them of Ryszard Siwiec was made by his family who in 1981 and published underground a booklet on him. However, it wasn’t until the transformation in 1989 when his dramatic act was brought back to the collective memory.

In September 1990 at the 10th-Anniversary Stadium in Warsaw a plaque commemorating him was affixed. Even when the stadium was demolished and the National Stadium built, the hero was not forgotten. A monument dedicated to Siwiec and a street named after him are located in immediate proximity to the stadium.

The collection of the Siwiec family 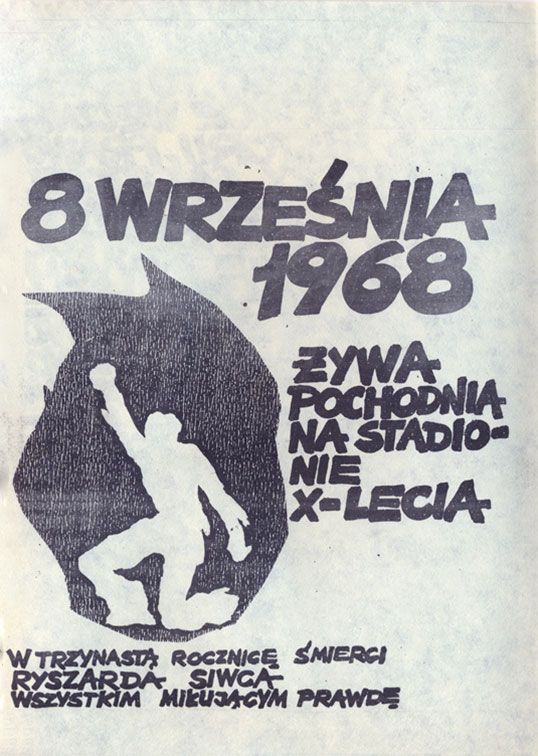 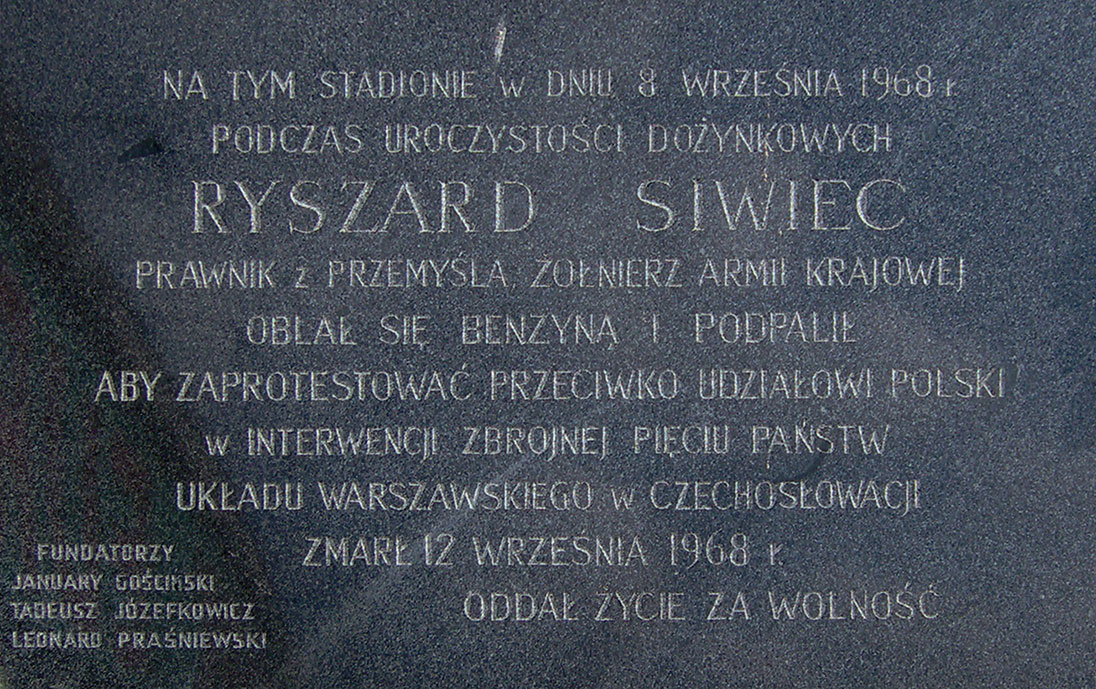 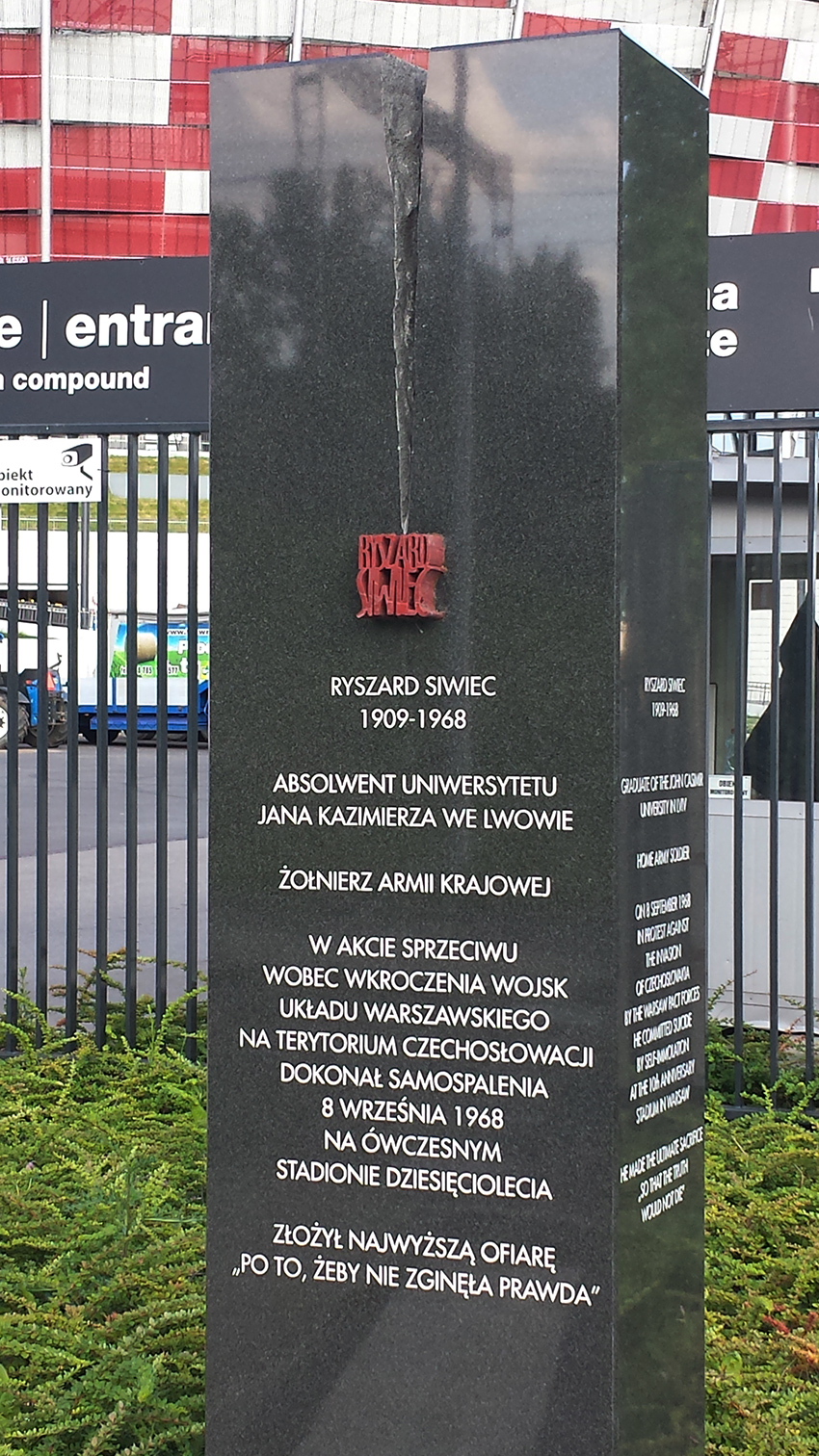 In 1991 a film ‘Hear My Cry’ and a radio drama ‘The Will’ were made. Both were directed by Maciej Drygas. He tried to answer a question why such a great tragedy was concealed. Why did such a dramatic and drastic protest which took place before masses of people turn out to be futile?

I
And then when the transmission was over we started thinking. Why did this man set himself on fire during the show, the dancing and not during Gomułka’s speech? Because, I’m convinced, if it had happened during the speech, the buzz of the stadium would have distracted him, like us.

The speech would have been interrupted and the whole world would have seen it.

II
The situation with Siwiec was like a train crash. I never... It didn’t fit my way of thinking. I just can’t explain it. Maybe because for us, Poles, suicide is culturally unacceptable. I don’t know.

I
It feels to me that his protest which ended so tragically was very unsuccessful. It dissolved in these Polish folk dances. In colourful ribbons we were talking about.

II
I thought it was better for him that he died. That of all things that would have happened to him in life, death was probably a better option.

Now, years after I’m wondering how I knew it. Because I had no idea about extermination, Katyń and what the system was doing to people. I learnt about these things later, yet subconsciously I knew, although I hadn’t heard of it before, that there had to be a punishment for this.

And I think that also for this reason this death seems so futile. This is us subconsciously accepting the dreadful side of the system.

...he dissolved in these folk Polish dances...
The extract comes from the documentary by Maciej Drygas ‘Hear My Cry’

Ryszard Siwiec was finally and adequately acknowledged and recognised by the state authorities. In 2001 Czech president Václav Havel decorated him posthumously with Tomáš Garrigue Masaryk Order. It is also noteworthy that the memory of his act in the Czech Republic lives on. The Polish Institute in Prague greatly contributes to treasuring this memory. In 2008 on the initiative of the Polish Institute and the Czech Philharmonic Orchestra a concert in his memory took place. In the same year the first monograph on Ryszard Siwiec written by Petr Blažek was published. In 2009 with the support of the then mayor of Prague Pavel Bem and the Institute for the Study of Totalitarian Regimes – Havelkova Street in a Prague district of Žižkov where the Polish Institute is situated was renamed Siwiecova Street. A year later a monument commemorating Ryszard Siwiec’s act funded by the Council for the Protection of Struggle and Martyrdom Sites was unveiled in front of the Institute building (the copy of the monument is located in Warsaw).

Naming a street in a Prague district of Žižkov after Ryszard Siwiec, 13th February 2009 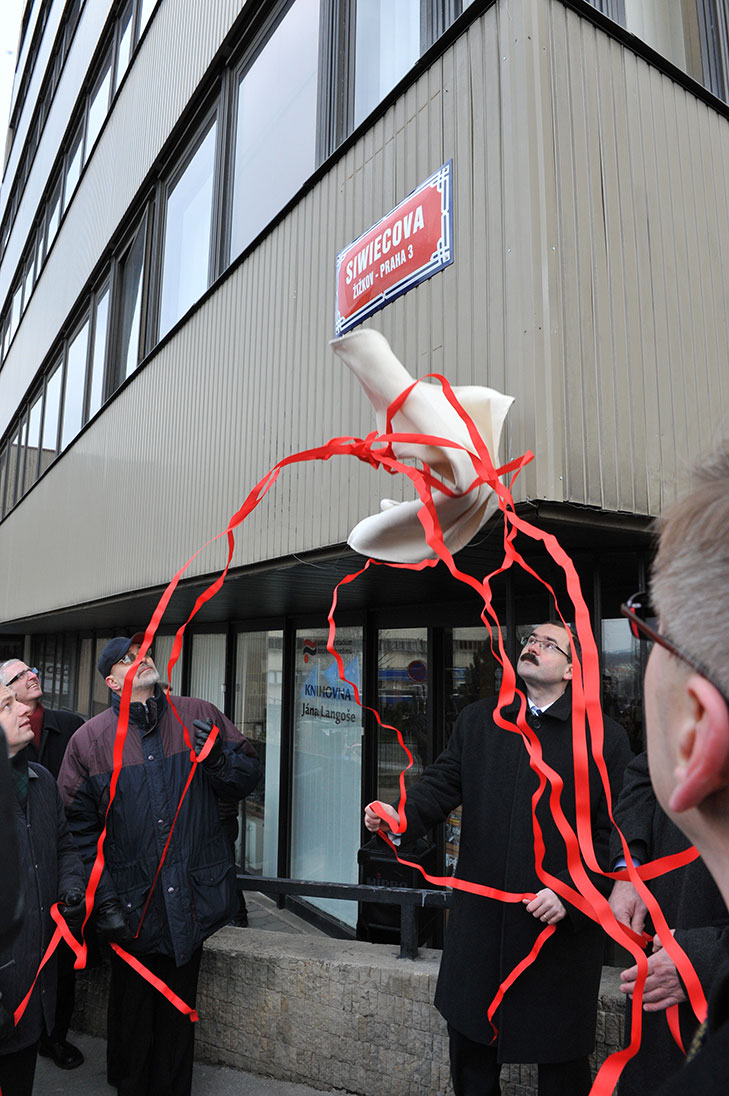 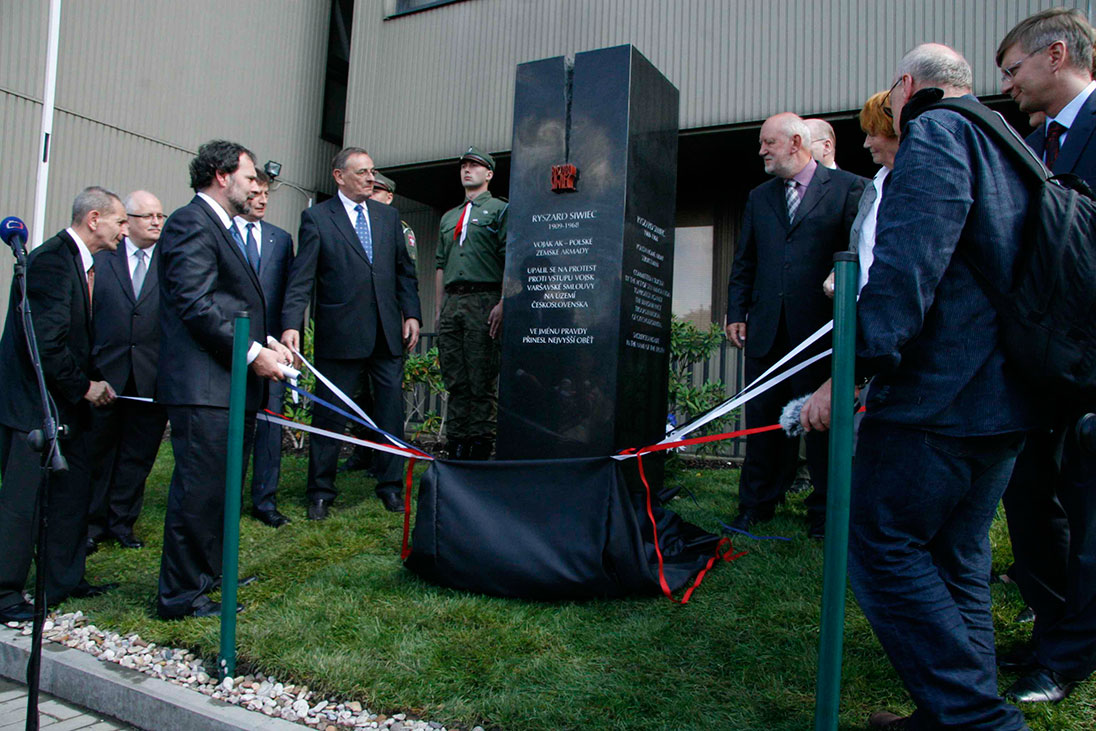 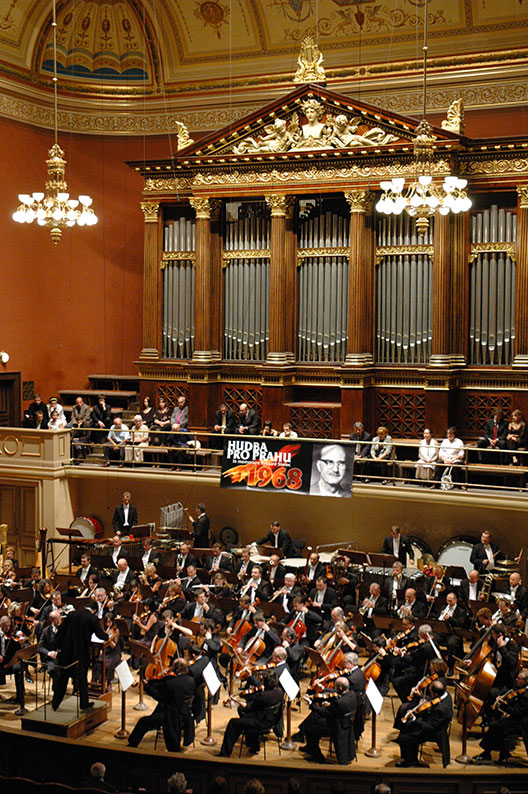 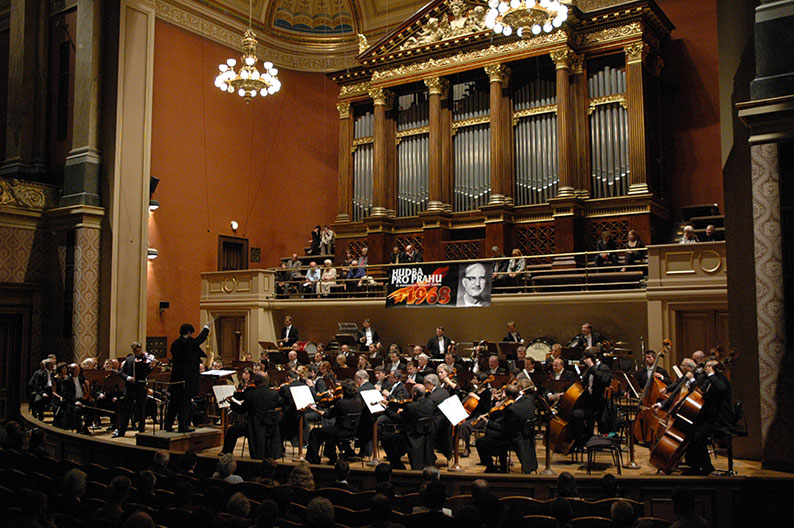 In 2003 Polish president Aleksander Kwaśniewski following the request of the Institute of National Remembrance decorated Ryszard Siwiec posthumously with the Commander’s Cross of the Order of Polonia Restituta. His family did not collect the decoration until 2007 from President Lech Kaczyński. In 2006 Slovakian president Ivan Gašparovič decorated Siwiec with the Order of the White Double Cross.

The residents of Przemyśl have not forgotten Ryszard Siwiec either. One of the bridges was named after him and in 2008 a commemorative plaque was fixed into the wall of the tenement block where he used to live. A year later on his 100th birthday a commemorative plaque was funded in Dębica and fixed into the wall of the primary school he had attended.

Czech president Václav Havel gives Elżbieta Siwiec-Szabada the Tomáš Garrigue Masaryk Order which her father was decorated with posthumously, 28th September 2001
Orders and medals Ryszard Siwiec has been decorated with:
– The Tomáš Garrigue Masaryk Order (the Czech Republic, 2001)
– The Commander’s Cross of the Order of Polonia Restituta (2003, collected by his family in 2007)
– St. Wenceslaus (2004)
– The Order of the White Double Cross (Slovakia, 2006)

The collection of the Siwiec family 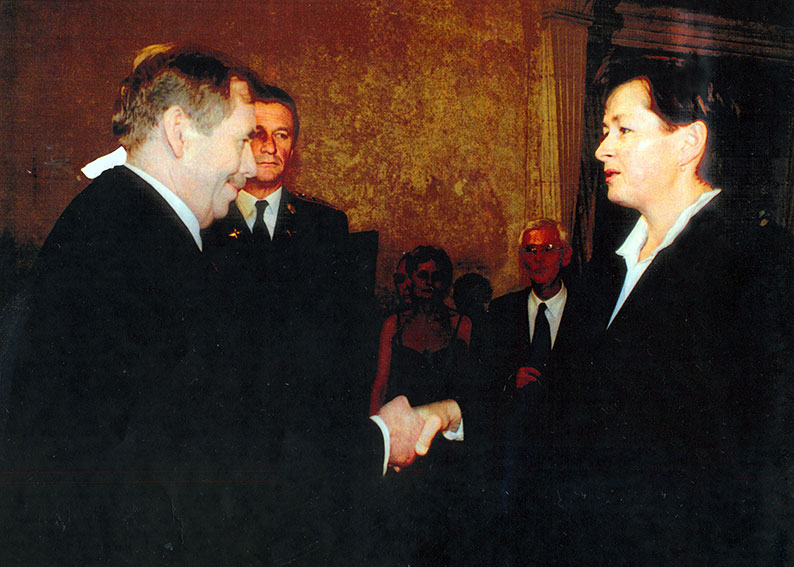 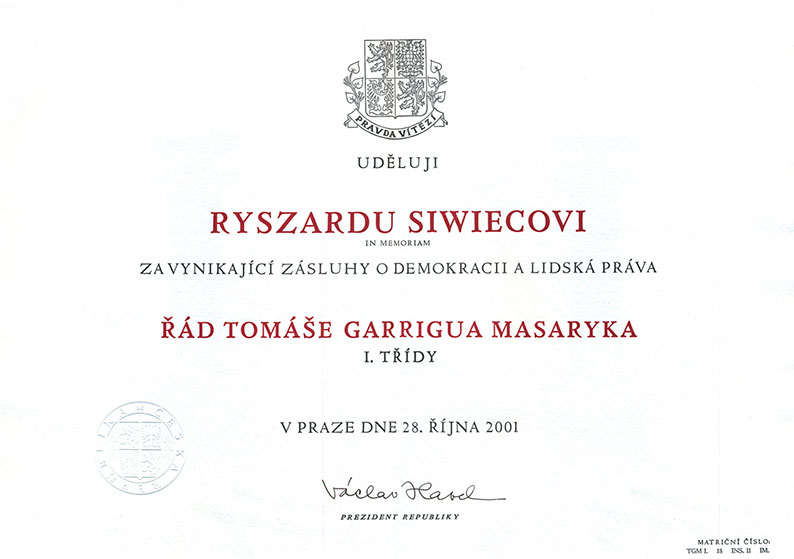 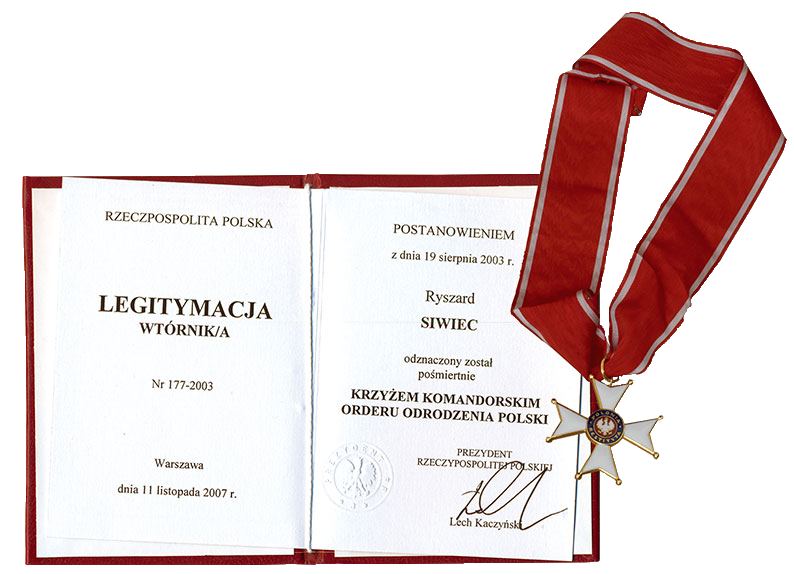 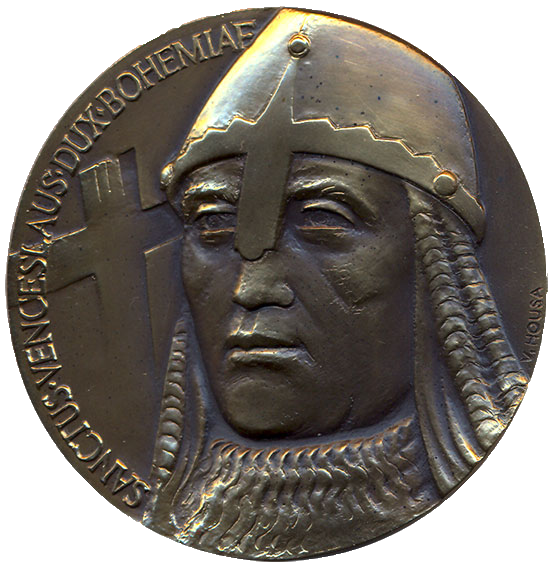 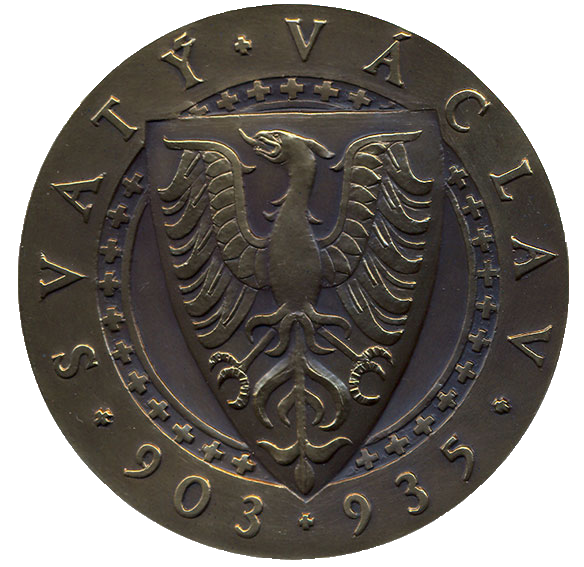 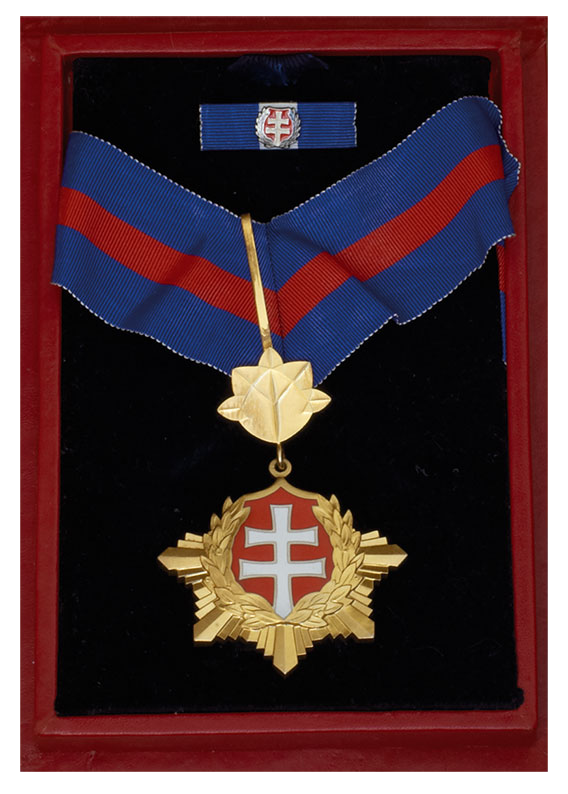 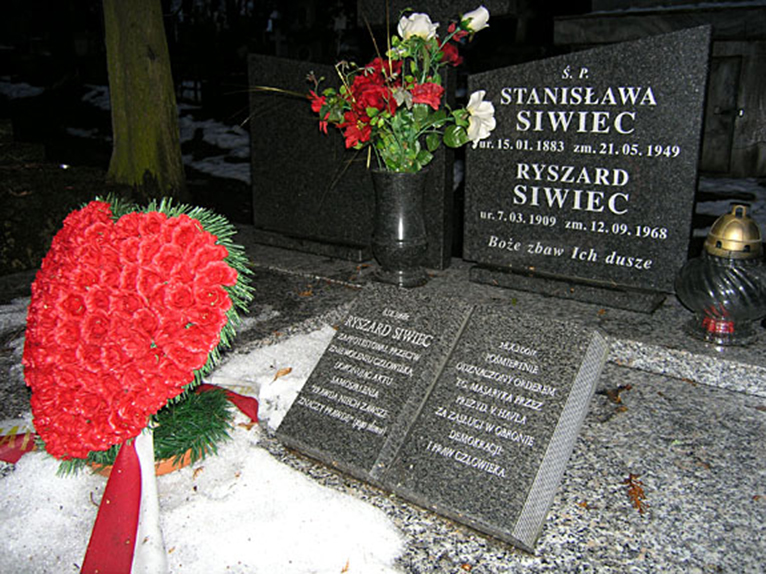 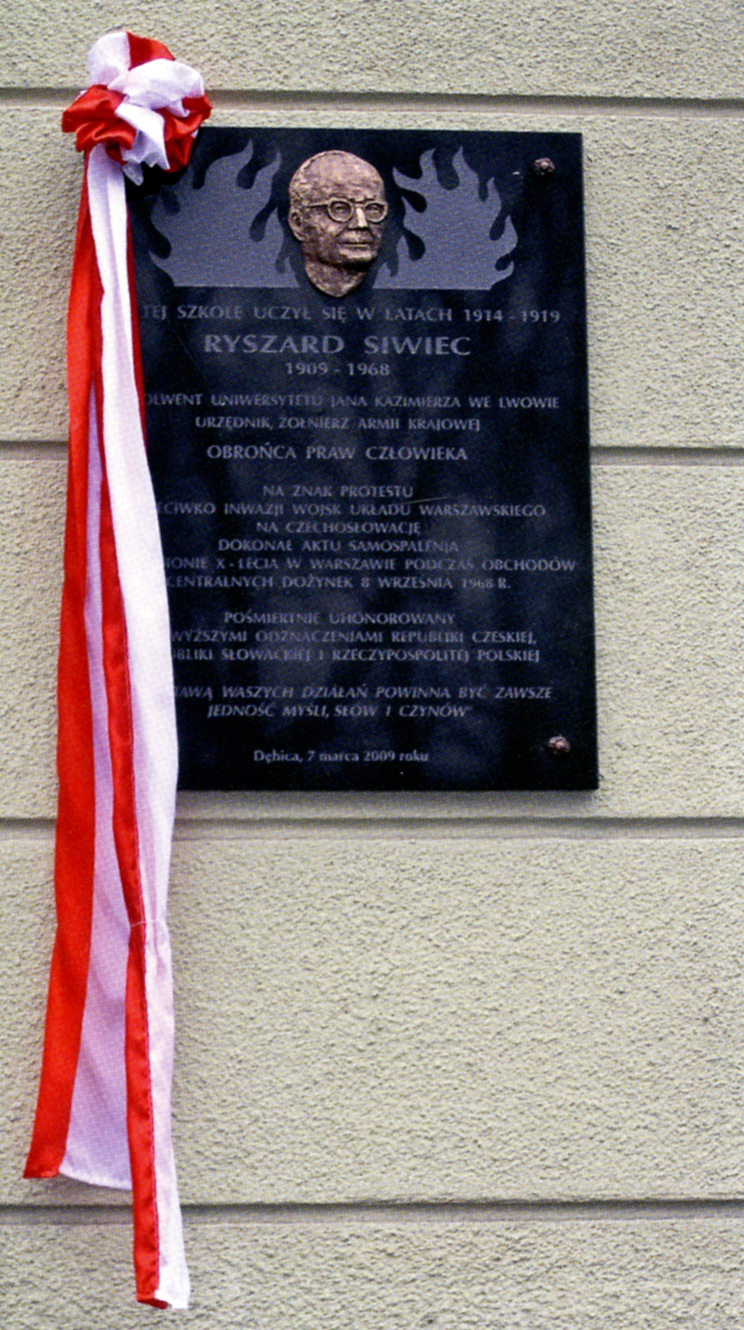